First meeting of the Erasmus + Project 'Art for Coexistence'

The past 18, 19, 20 and 21 of April, in Velilla de San Antonio (Madrid) took place the First meeting of the Erasmus + Project 'Art for Coexistence'. This new project, approved by the European Union, has a development period of 2017-2020. 'Art for Coexistence' is a union project between Spain, Portugal, Belgium, Hungary, Germany and Italy and where the municipalities of Velilla de San Antonio, Évora, Brussels, Budapest, Berlin and Turin take part. 'Art for Coexistence' incorporates town halls, schools, universities and non-profit entities. The project aims to create, with European networking work, a space for the exchange of training, good practices, experiences and pedagogical materials, which is not only in the exchange, but in the creation of models that endure over time, more beyond the experience or people who put it into play. 'Art for Coexistence' has the participation of seven educational centers with a high percentage of students at risk of social exclusion. The project will involve more than 200 teachers and more than 1,000 students. 15 artists collaborate, more than 50 technicians of educational administrations, volunteers and university students in practices. The key will be the coordinated work between teachers, minors, their families (about 600 people) and the socio-educational community in general. At least 4,300 direct and indirect beneficiaries are expected.

In this context, the first meeting of the Erasmus + 'Arte por la Convivencia' project was held on April 18, 19, 20 and 21 in Velilla de San Antonio, with the assistance of 22 project representatives from Italy. Portugal, Switzerland, Germany, Belgium and Hungary, in addition to the 100 representatives of the project by the Spanish partners. Along with this, the event also had the presence of representatives of the cities of Évora, Budapest and Velilla de San Antonio itself, in a meeting where all of them, along with schools, associations and artistic teams worked for two days very intense. 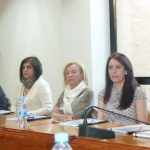 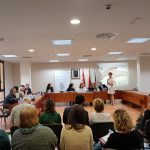 The Erasmus + 'Arte por la Convivencia' project has the participation of 15 members, which defines its heterogeneity and complementarity. And they are: