The last 29th and 30th of November, in Turin, took place the third meeting of the Erasmus + ' Art for Coexistence ' project, in which the FYME participates actively. The meeting was attended by 26 people from six countries (Spain, Portugal, Hungary, Germany, Belgium and Switzerland), and all the Italian delegation that was present and where it is necessary to emphasize the work of Paola was born. The meeting began at the Turin City Council, with a warm welcome from the councillor of Culture and the president of MUS-E Turin, and has continued with visits to the Turin schools that are part of the project, apart from numerous activities Additional, such as that made with the Albertina Academy of Fine Arts. 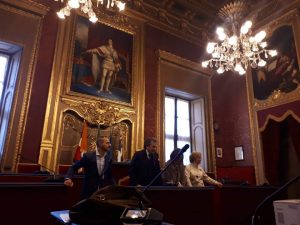 "It was a special meeting," says Antonio Merino, project manager for the FYME and present on the trip. "As it is key in the Erasmus + projects the exchange of good practices and the visibility of the work that is done, also took advantage of the appointment to know entities with which it would be interesting to share experiences. In this sense, good synergies were generated between the FYME and Mus-e Italia, Mus-e Torino and Mus-e Milano, thanks to the interest shown by the different people who work in the project ". At the appointment of the 3rd meeting of the Erasmus Project + ' Art for coexistence ' was also conceived the possibility of making an exhibition in 2020 with the aim of bringing to Turin the collection ' Kafka, the visionary ' of the painter Sofía Gandarias. We believe this occasion to put the art and pictorial work of Gandarias on the table at a time when xenophobic and racist speeches are emerging in Europe. With this particular collection, Gandarias advocated coexistence and respect from Kafka's figure. In this sense, and thanks to Felix Labrador, of the university Rey Juan Carlos, have started contacts with the universities of Turin and Aosta in order to future actions around the historical heritage through art. It is ultimately an excellent work of networking and construction of equipment. We just want to ask for one more thing, as Antonio Merino himself points out. "That ideas and desires are translate in realities. And that is achieved with effort, effort, and art and craft to transform. " [Gallery columns = "5" ids = "892,891,888,886,885"]