We collect an experience made by the CEIP Tomás y Valiente, of Velilla de San Antonio, which took place last year 2017-2018, on April 8, and in which we wanted to share what lived with all the countries that are part of the Erasmus + ' Art for Coexistence ' project , of which the FYME is part. It was about opening the educational center to NGOs and entities working together from the CEIP Tomás y Valiente and doing it with the students themselves as protagonists, linking the whole community to work for the principle of the defense to the Earth. So it articulated an educational activity based on a meeting of delegates to organize a composting workshop with the purpose of making compost during the course in charge of all the boys and girls of the school.

And what better way to understand what was done to give voice to the center itself so that we narre what lived in that day of last April:-On the 8th there was a meeting of delegates, we met in the library and there was waiting for us Diana , a girl who belongs to the NGO ' Friends of the Earth ' who came to teach us something. First he asked us to help to mount a box that was dismantled on the floor, it was like riding a puzzle. It took a while to get it, it was not easy to fit the pieces. 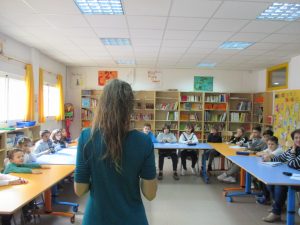 He then asked us to thought for what that box could serve and each of the delegates went on to say what we thought. We all agreed that the box would serve to store things, even one of the little ones said it would serve to get him inside! Others thought it seemed like it would serve to throw in garbage. So little by little, talking with Diana we knew that the box we had assembled is called composter and is used to make compost none knew what was the compost and we had not seen, so Diana showed us a full boat that turned out to be dark Earth , clean it smelled just to ground. Finally he explained how to get it:

Also, at this point, Diana told us that we had to be very careful with several things: